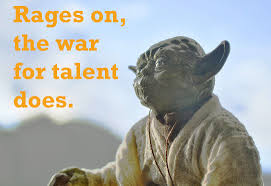 In the late 1990s, McKinsey & Co. coined the phrase “war for talent” as competition was becoming increasingly global, the workforce was aging, and people were job-hopping more often. The War for Talent was the very first article I wrote for the Buzz when we launched our newsletter in 2000 and 22 years later it’s truer than ever! The demographic and societal forces that kicked off the war for talent have only become more intense.

For executives in many industries—particularly tech—the talent wars have been a reality for years. And now they’re the new normal for everyone.

Baby boomers are retiring earlier than expected and in increasing numbers. In addition, 1 in 4 employees across generations are planning to change jobs as the pandemic subsides. With uncertainty around childcare access and school closures, nearly 3 million women have left the labor force and college enrollment is declining making that pool even shallower to develop fresh talent. Not to mention, nearly every competitor you have is fighting for the same talent.

These trends have led to the lowest labor force participation rate since the 70s. And with a slowing population growth rate, there are simply not enough workers to fill open roles. While unemployment number are at a record low, the unemployment numbers for those with college degrees are typically half the national average, making both of our jobs even tougher.

The original war for talent was focused on senior executives and leadership skills but today, that envelops just about every functional discipline within an electrical distributor. The largest shortage falling to skilled inside sales, technical support, and business development.

Many companies are increasing wages and offering sign-on bonuses in response, but often still struggle to retain or effectively develop that talent. A higher wage will fill some roles today, but it won’t build the skills your company needs for the future or create the engagement that will lead to long-term retention.

In 2016, Millennials became the largest generation in the U.S. labor force. They have higher rates of job mobility, more demands for flexibility, and are more open to a ‘gig’ then any generation before. This is in polar opposition of the Baby Boomer generation where workers were more apt to stay with a company for their entire career to retire with the gold watch. Times are certainly changing, the landscape of this industry will continue to evolve as technology advances and new ideas are brought the forefront in the industry.

Create a strong presence on campus to build brand awareness create some buzz for your company. Here you will find tomorrow’s leaders in your organization and a story that starts with a college recruit and ends with a leadership role, gains you more favor with tomorrows stars than you could ever expect. Who doesn’t love to hear that the company (fill in the blank title) came up through the same path?

Compensation is Just the Start

Money is important, but it’s not the magic bullet. At the end of the day, a large paycheck won’t lead to motivation or performance or even guarantee they’ll stick around that long. Fair pay is hard to define in this business, but a general rule of thumb is to make your candidate an offer that is better then where they are today, no one wants to go across the street to do the same job for the same money. A balanced benefits package is just as important, but you’re unlikely to differentiate yourself on that front…so don’t fight a losing battle by putting all your eggs into a basket that ultimately looks like every other basket.

If you can’t stand out with money, do it with culture. If pay is the same across the board, differentiate yourself as a GREAT place to work. While you can’t mandate culture you have to build it and employee recognition and company culture that stands out from the pack wins (almost) every time.

Simply posting a job and waiting for applicants likely won’t allow you to meet your hiring goals in 2022.  Quality talent is not applying to posted positions.  I’m consistently hearing from hiring managers that they are not receiving qualified applicants responding to posted jobs.

Effective hiring today requires much more.  Are you ready?

The “War for talent” dates back to 1997 but has recently become quite the buzz phrase again.  Identifying quality talent is not the hard part.  Attracting and getting top talent to engage in a meaningful conversation relative to making a career move is.  So how is that accomplished?

Partnering with a professional recruiter with proven industry expertise is paramount in the current market.  We know where the top talent is and which candidates to directly target.   Our network brings tremendous value to your hiring process.

Candidates have many opportunities from which to choose.  You must treat recruited candidates differently than applicants.  There is no gray area here.  At this point, the candidate has been thoroughly vetted by the recruiter for both professional and cultural fit.  You will have received a comprehensive summary of their accomplishments from your recruiter explaining the ‘why’ behind their fit.  The candidate by now fully understands your organization, your products, the verticals you serve and how you go to market.  The candidate is now excited and ready to meet your organization’s leadership and key members of the team that they will be working with.  Are you prepared to move quickly in your hiring process?  A video meeting is a great start.  Once fit has been established, bring the candidate on-site within a week.  Invite them to meet in a round-table discussion with all key members of the hiring team.  Separate, individual interviews are strongly discouraged.  Have those present be champions of your organization, sharing why they joined your company and what differentiates your organization, and the given role, from competitors.  It is imperative that you effectively market your organization to the candidate as much as you’re discussing their fit for the role and responsibilities.  Hiring in today’s market is truly a two-way process.

Once the decision has been made to move forward, extend a formal written offer via your recruiter within 24 hours.  Your recruiter will have provided you with salary expectations from the candidate.  Make a strong offer.  Show that you’re truly invested and genuine in wanting to start a long-term relationship with the candidate.  You must remove emotion from the offer stage.  Allow your recruiter to act as the intermediary to manage expectations on both sides and come to an agreement.

To hire top talent in the current market, you must have a candidate-centric approach.  The candidate experience must be transparent and enjoyable.  Your brand must be authentic.  Guarantee a positive experience by effectively communicating the values and culture of your company throughout the hiring process.  Understand what issues beyond compensation are important to the candidate.

The labor market will remain incredibly competitive for some time.  Hiring today is different than it was years ago.   Flexibility and understanding (and of course, partnering with a proven, professional recruiter) will allow you to compete in the current ultra-competitive hiring market and successfully meet your hiring goals.

I had the honor of speaking at the Wire Association’s Operator Summit earlier this month in Dallas and  was amazed to hear how many companies are struggling to hire people.  Below are some takeaways from the event.

One company is having success allowing people to work 36 hours on the weekend but paying for 40 hours.  These 12-hour Friday through Sunday shifts allow employees to go to college and finish their degrees.   Due to this practice and the part time scheduling, this company is fully staffed during the weekend shifts.

Make sure to consider alternative hiring sources.   Our Egret Survey found that 34% of people were contacted by recruiters and 31% were referred by an employee.  Do you give referral fees to your employees?   According to LinkedIn, the average referral fee  is $2,500 and according to goremotely.net, referred employees produce 25% more profit than other employees and the retention rate is longer.

Other hiring sources discussed by several companies that attended were:

Once you find candidates, work on improving your hiring process.  That process is crucial to how candidates and new employees view your company.

Egret has found that candidates have numerous opportunities available in this job market. Be ready to move quickly and have good, solid offers prepared.  Also be ready to negotiate.  Flexibility is key!

Next month I will cover “How to Prepare a Good Offer and Retain Employees.”